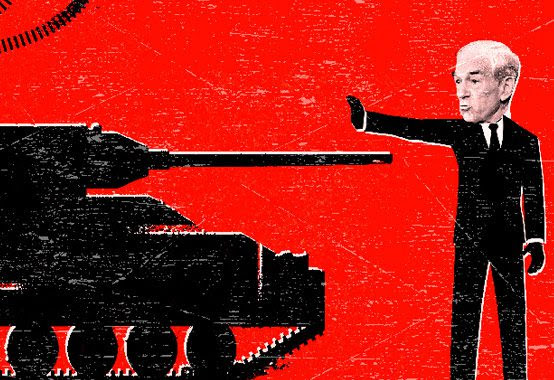 Writing from the "hard left," CounterPunch's C. G. Estabrook ponders whether "after the Romney fiasco, a hollowed-out Republican party – opposed from several directions by groups like the Tea Party and Occupy Wall Street – will be reconstituted somewhat as it was in 1896 and 1968, and as the Democrats were after 1932" — An Anti-War / Anti-Wall Street Republican Party? He concludes:

If so, there’s an obvious understudy waiting in the wings – the Ron Paul movement, already smarting at what they see as their illegitimate exclusion by the official Republican party, sealed at the convention in Tampa.

Is it possible that Barack Obama, master of the child-killing drones and the austerity-producing Grand Bargain, in his triumph will be accosted by a new Republican party, anti-interventionist and anti-Wall Street (or “isolationist” and “libertarian,” if you prefer) – Ron Paul’s characteristic positions? Remember that it was only a short while ago that Republicans and Democrats alike smiled haughtily at Rep. Paul’s demand to “Audit the Fed!” But by last July, as the Huffington Post reported, “In a rare moment of bipartisanship, the House overwhelmingly passed a bill by Rep. Ron Paul (R-Texas) to audit the Federal Reserve…”

When Ron Paul leaves office in January, he will have been more successful than many of the legislators who spent decades maligning him. Paul’s ideas have gradually gone from marginal to mainstream, and his record shows how much even a single determined man of principle can do to change a movement. In foreign policy especially, the Texas congressman leaves behind a new generation of leaders, both libertarian and conservative, who challenge the disastrous bipartisan consensus.

Sadly, the only thing I can think of that would ever get me to vote Democrat would be a GOP that had been taken over by the Paulistas.