One of the numbers heard on the timeless Mermaid Avenue, "a 1998 album of previously unheard lyrics written by American folk singer Woody Guthrie, put to music written and performed by British singer Billy Bragg and the American band Wilco," purchased by yours truly on 180-gram high performance vinyl at Record Archive this weekend.

Labels: Early Music, Musica Sacra, The Age of Faith, The Catholic Faith, The Eldest Daughter of the Church

The Age of Faith... and Engineering

LewRockwell.com links to this post about "a time of great discovery and invention" which "also saw major advances in technologies that already existed, and the adoption of many Eastern technologies in the West" — Top 10 Inventions of the Middle Ages. N.B.: This is a list wisely "excluding military inventions."

The above woodblock print, "in which far-off windows glow red, and their light glimmers on the dark river," with "[g]ray dusk, slender black trees, and two silhouettes, a kimono-clad and a man in a mix of traditional and Western clothing," grace The American Conservative's Eve Tushnet's review — Geishas By Gaslight: Kobayashi Kiyochika at the Freer Gallery.

The Fall of Mosul

Mike Whitney rightly calls it the most "spectacular foreign policy debacle since the Saigon withdrawal in April 1975," noting that "the Obama administration’s strategic goals and those of the terrorists are nearly identical" — Black Flags Over Mosul.

From a UCIEP listserv discussion:

We are hearing from our Iraqi students that they are being told that their stipends may be reduced or cut due to events in Iraq. Students from Mosul (Christians) are asking about asylum.

"America's alternative to war and empire is not 'isolationism'" — Noninterventionism: A Primer. He reports that "52 percent of Americans now prefer that the U.S. 'mind its own business in international affairs,' which represents the most support for a restrained and modest foreign policy in the last 50 years."

We won't live like this any more. If police won't do anything, we will. Some of us may die, but they will too.

Thus spake a representative of the local Nepalese and Bhutanese community, after "hundreds of incidents of robbery and violent and verbal bullying in recent years" — Unite Rochester: Local refugees targeted. The remarkably honest report (the race of the victimizers is named explicitly) begins with this caveat lector:

Over the past year and a half the Unite Rochester series has explored numerous topics related to the complicated topic of race in Rochester. Today's installment explores a sensitive and potentially volatile situation in the Jones Square neighborhood. Our aim is to alert the community to a sparking flashpoint in hopes that efforts can be made to unite two communities that are currently at odds. The language is at times stark, but is meant to be an honest representation rather than an attempt to give offense — or give credence to inappropriate and incendiary statements. 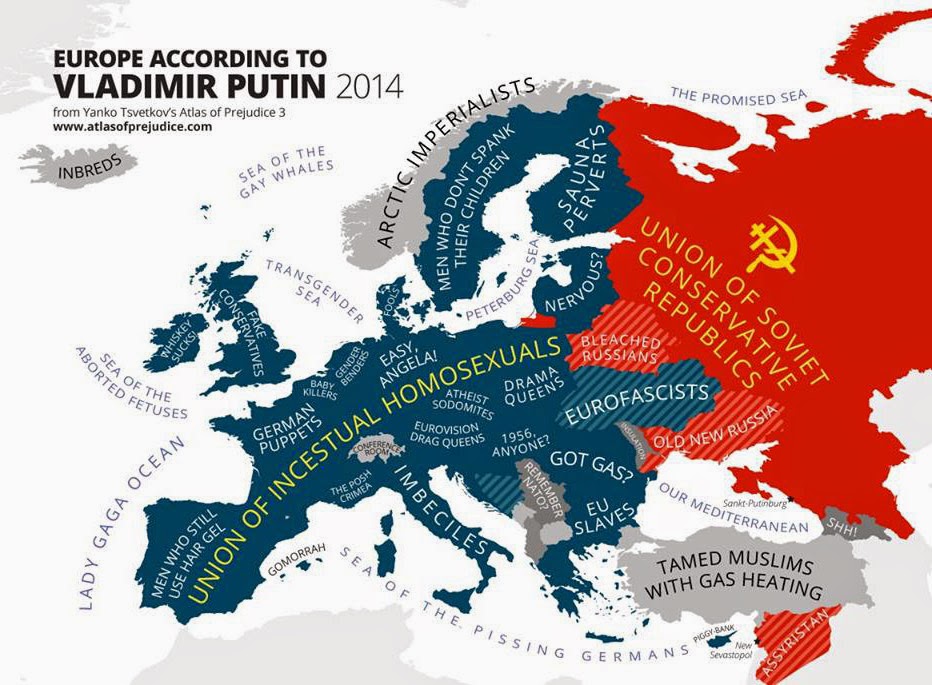 A conservative blog for peace posts the above graphic — Fallen human-nature follies, and Putin's view of Europe. I said it before and I'll say it again, "Ich bin Putinversteher."

"In America, If You Don't Like Your Boss, You Punch Him on the Nose and Light Out for the Frontier"

Thus spake Bertrand Russell, the agnostic whose tome A History of Western Philosophy is a must-read, quoted in this post linked to by A conservative blog for peace, summarized aptly by the Young Fogey as "dumb people don't know they're dumb; smart people often know their limits" — "The Dunning-Kruger Effect".

Sam Amidon Performs "Short Life" & "As I Roved Out"