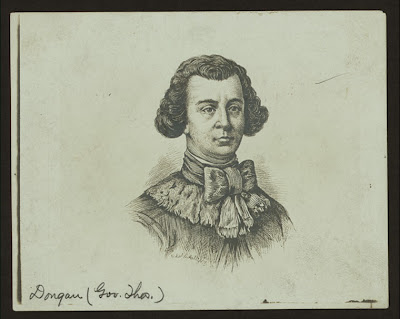 "Neither the Dutch nor English were pleased when the Duke of York converted to Roman Catholicism in 1672," we read in The Catholic Church in Colonial America by Dr. Marian T. Horvat. In 1882, Thomas Dongan, 2nd Earl of Limerick, was appointed Governor of the Province of New York by then-Duke of York and future James II of England, the last Catholic monarch to reign over the Kingdoms of England, Scotland, and Ireland.

The Catholic Encyclopedia (1917) entry on Thomas Dongan details the Irishman's enlightened governorship and the profound impact it would have on the political history of the English-speaking world:

In 1682 the Duke of York, the Lord Proprietor, selected Dongan to govern the Province of New York, then bankrupt and in a state of rebellion. In this office Dongan proved himself an able lawgiver, and left an indelible mark on political and constitutional history. He convened the first representative assembly of New York Province on 14 Oct., 1683, at Fort James within the present boundaries of the city of New York. This assembly, under the wise supervision of Dongan, passed an act entitled "A Charter of Liberties"; decreed that the supreme legislative power under the Duke of York shall reside in a governor, council, and the people convened in general assembly; conferred upon the members of the assembly rights and privileges making them a body coequal to and independent of the British Parliament; established town, county, and general courts of justice; solemnly proclaimed the right of religious liberty; and passed acts enunciating certain constitutional liberties, e.g. no taxation without representation; taxes could be levied only by the people met in general assembly; right of suffrage; no martial law or quartering of the soldiers without the consent of the inhabitants; election by majority of votes; and the English law of real property.

Thus to Dongan's term as governor can be dated the Magna Charta of American constitutional liberties, for his system of government became the programme of continuous political agitation by the colonists of New York Province during the eighteenth century. It developed naturally into the present state government, and many of its principles passed into the framework of the Federal Government. Moreover, a rare tribute to his genius, the government imposed by him on New York Province, 1683, was adopted by England after the American War of Independence as the framework of her colonial policy, and constitutes the present form of government in Canada, Australia, and the Transvaal.

He also was also a man of peace. He "established the boundary lines of the province by settling disputes with Connecticut on the East, with the French Governor of Canada on the North, with Pennsylvania on the South, thus marking out the present limits of New York State," and "outlined the masterly Indian policy which kept the Five Nations friends of England." After his ouster, he "refused command of a regiment with the rank of major-general, [and] retired to his estate on Staten Island."

Ironically, this enlightened leader who had "solemnly proclaimed the right of religious liberty" "was obliged to flee for safety in the religious persecution aroused by Lesler in 1689."

The encyclopedist concludes, "In spite the brief term of five years as Governor of New York Province, by virtue of the magnitude, of the enduring and far-reaching character of his achievements, he stands forth as one of the greatest constructive statesmen ever sent out by England for the government of any of her American colonial possessions."

[Reprinted from The Western Confucian.]